The process of sporulation represents one of the simplest cell differentiation systems, in which gene expression coordinates morphological changes in the cell leading to the creation of new cellular compartments and the segregation of the chromosome between them. Endospore formation entails an altruistic process by the cell in which resources are heavily allocated to the formation of a forespore and its protective layers. Sporulation in B. subtilis has served as a model for the understanding of several basic processes in bacteria, including transcriptional regulation and cell differentiation. Here, we studied the processes of DNA translocation during sporulation in B. subtilis. This process is essentially achieved by the DNA translocase SpoIIIE, an enzyme that assembles at the division septum and rapidly translocates the chromosome (~ 3 Mbp) into the forespore by using the energy of ATP hydrolysis. FtsK, a closely related homologous DNA translocase from Escherichia coli, is involved in the coordination of chromosome segregation and cell division. FtsK brings the sites of chromosome dimer resolution (dif sites) into close proximity by translocating DNA directionally. SpoIIIE and FtsK are composed of an N-terminal transmembrane domain involved in septal localization, a putatively unstructured linker and a C-terminal motor domain involved in DNA translocation (Fig. 1a), which itself is composed of three separate subdomains: α, β and γ.

Genetic and single-molecule studies showed that the translocation directionality of FtsK is dictated by specific chromosomal DNA sequence motifs GGGNAGGG (FtsK orienting polar sequence (KOPS)) or GNGNAGGG (FtsK recognition sequence (FRS)). The interaction of FtsK with KOPS is orientation specific: when encountering KOPS from the 3′ end of the G-rich strand (nonpermissive direction) FtsK pauses and frequently reverses its translocation direction, but it passes unobstructed when encountering KOPS from the opposite direction (permissive orientation) (Figure below, left). The KOPS distribution is highly skewed (defined as the percentage of occurrences of the sequence on the leading versus the lagging strand of DNA replication) in the E. coli chromosome and switches strand and orientation at dif (Figure below, right). Thus, this orientation-specific recognition mechanism and the asymmetric chromosomal distribution of KOPS direct FtsK translocation toward dif from any location along the chromosome.

We have recently shown that the γ-domain of FtsK is responsible for the specific recognition of KOPS/FRS sequences using a combination of ensemble and single-molecule methods (magnetic and optical tweezers, see Ref [1] ). Previous work by the Pogliano Lab proposed that SpoIIIE is a unidirectional DNA transporter that exports DNA from the compartment in which it assembles (see figure below, and Ref. [2]). In this mechanism, SpoIIIE complexes assemble on a specific side of the septum (mother cell or forespore compartments). The side in which SpoIIIE assembles thus determines the direction of DNA translocation. The mechanism regulating this directional DNA transfer, however, has remained unclear.

In a previous  study (see Ref. [4]), we used single-molecule, bioinformatics, and in vivo time-lapse fluorescence microscopy to show that SpoIIIE establishes DNA translocation directionality by interacting with short DNA sequences (SpoIIIE Recognition Sequences, SRS) that are highly skewed along one strand of the chromosome from origin to terminus of replication. We used a novel fluorescence microscopy method pioneered by Eric Becker at Kit Pogliano's lab to observe and quantitate the translocation of DNA by SpoIIIE in vivo. In these experiments, we established that the C-terminal DNA binding domain of SpoIIIE (γ-domain) is required for directional DNA transfer (see Figure below). 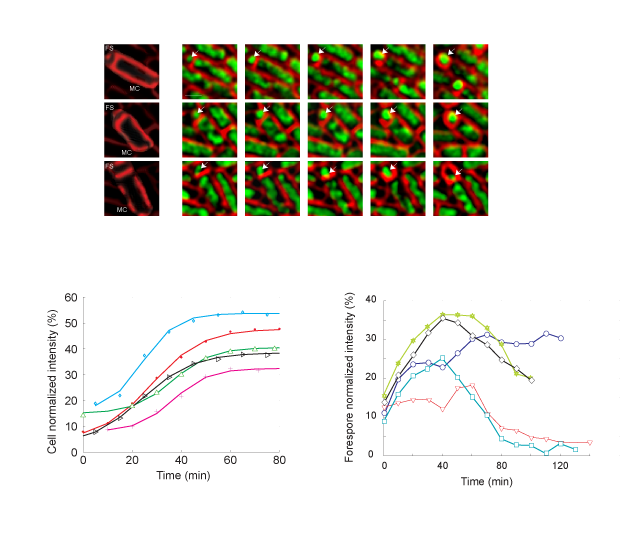 Single-molecule methods were used to show that translocation directionality of SpoIIIE is affected by the presence of short sequences (SpoIIIE recognition sequences, or SRS) that are specifically oriented in the B. subtilis chromosome pointing from the origin to the terminus of replication. Biochemical ensemble experiments allowed us to establish that interactions between SpoIIIE and SRS are orientation specific. Further genetic experiments showed that interactions between SpoIIIE and SRS are also orientation-specific in vivo. Our experiments finally showed that mutations or deletions in the γ-domain not only affected directional DNA movement in vivo but also abolished sequence recognition in vitro, suggesting that this domain is responsible for directly mediating SpoIIIE/SRS interactions. Our findings thus indicated that DNA transfer by SpoIIIE is regulated by direct and orientation-specific SpoIIIE interactions with short chromosomal sequences that tell SpoIIIE in which direction it has to translocate. These and previous data (Sharp, 2002) thus suggested that the establishment of a compartment specific complex had to be regulated by SpoIIIE/SRS interactions. We tested this prediction by using a recent fluorescence microscopy assay developed by Eric Becker to test in vivo for compartment-specific SpoIIIE assembly. Consistent with our model for sequence-directed DNA export, the γ-domain of SpoIIIE was essential for the assembly of compartment-specific complexes. This unified model reconciles previously proposed simple exporter and sequence-directed models for directional DNA transport by the SpoIIIE/FtsK/Tra family DNA translocases. 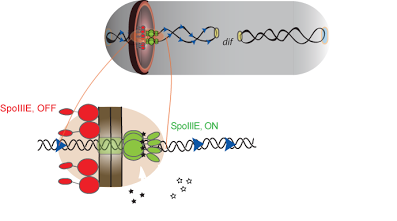